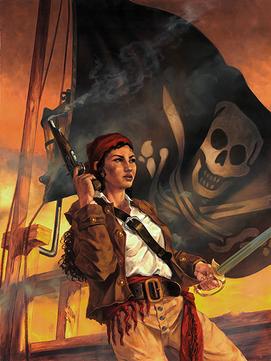 The latest adventure from Toni and Steve! Abandoned as an infant, fifteen-year-old BONNIE doesn’t know who she really is, which is fine if you’re a garden-variety troubled teen. Not so fine if you’re marked for death by an ancient pirate curse.

After her latest scrape with the law, Bonnie is abruptly carted off to a “reform sailing camp”, which she discovers is actually a training compound of a centuries-old secret society, the Brigands of the Compass Rose. Bonnie and her fellow teen internees must learn to master the old ways of sword and sail as they prepare for battle with the Brigands’ sworn enemy, a brutal and merciless pirate of the 18th century. Their foe still lives thanks to a bargain with dark powers, the terms of which now include Bonnie’s own demise. During the course of her training, Bonnie must uncover the truth about herself before the pirate does or face certain death in a watery grave.

The Brigands of the Compass Rose